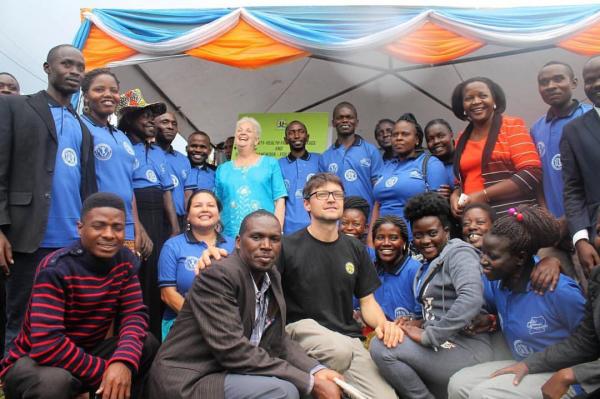 On 18 May 2017, the U.S. Ambassador to Uganda Deborah Malac visited YAWE Foundation as part of a brief tour in Kabarole District. YAWE’s Executive Director, Akora George, and the music, dance and drama group welcomed the Ambassador, along with other esteemed guests including the Centers of Disease Control and Prevention’s Country Director and Director of Baylor Uganda. The Ambassador’s visit, which was organized by Baylor Uganda, included a brief tour of booths set up by the YAWE women’s craft group, knitting and tailoring, and bakery as well as other local NGOs (Kaana Foundation, Hakibale Women’s Empowerment, Y.E.S, Kida, and Ride Africa). The YAWE Brass Band officially kicked off the occasion with an impressive performance of the Ugandan and American national anthems. After prayer, Mr. Akora, the Women Member of Parliament, Local Chairman IV, and Resident District Commissioner conducted welcome speeches, which concluded with a speech from Ambassador Malac and the signing of the Community-Facility Linkage Framework. The purpose of the visit was to jumpstart the framework, which is a grassroots approach to make treatment more available to individuals living with HIV through local health centers and organizations rather then having people make their way to hospitals and larger clinics for routine care. YAWE embraced the honor of hosting the U.S. Ambassador as they strive to be exemplary in building the bridge between rural and urban health care.